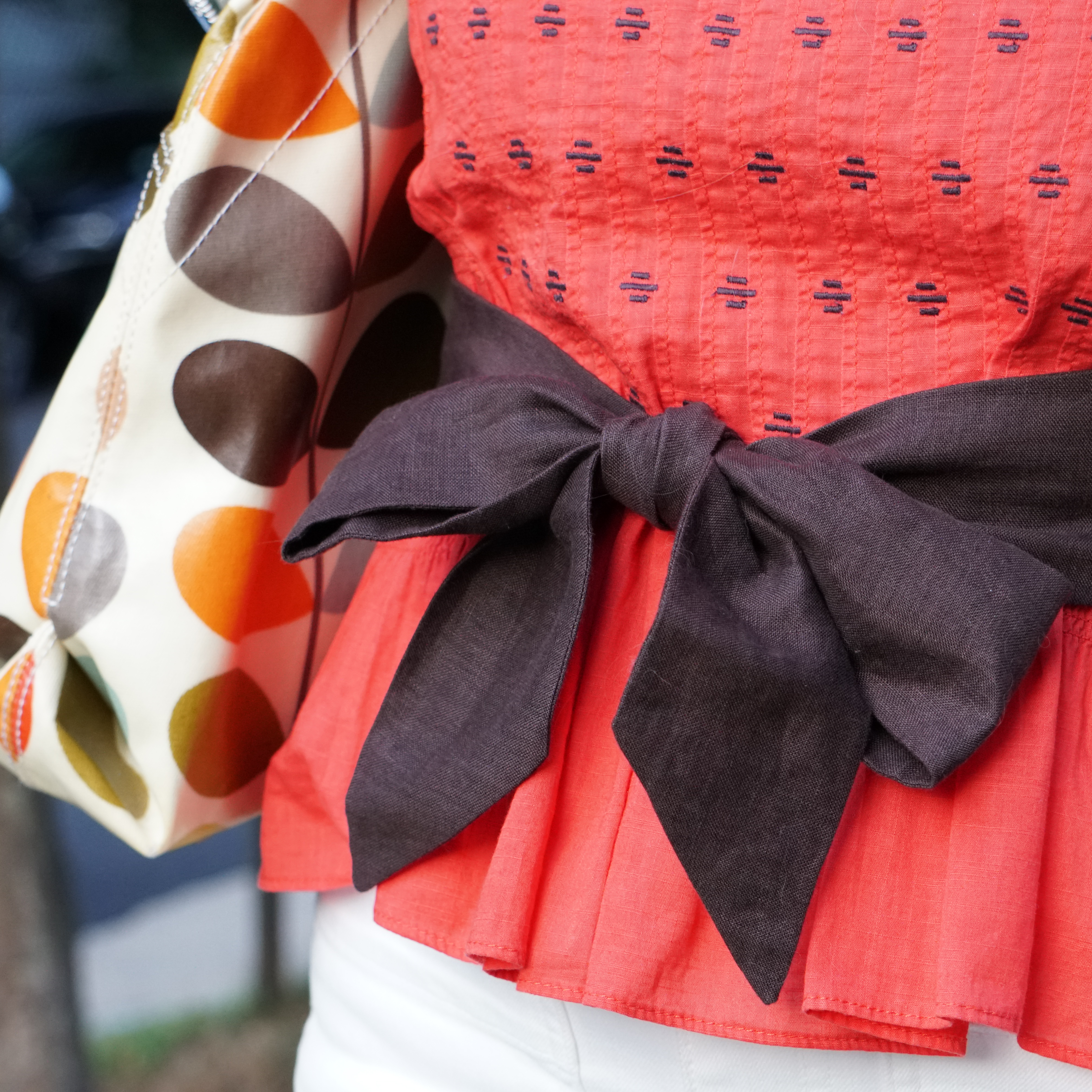 The most devoted Directrice scholars may recognize this outfit from its original post date (August 2015) or from its inclusion in the Key Set (October 2017), but it will surely be new to some of you? And welcomed by all of you?

Sometimes when I ask myself, “Am I a greedy little thing?”* — I remember that I do take good care of my clothes and keep them a long time. I am a good person.

Lay your eyes on this humble embroidered, smocked top that I bought from Anthropologie in 2008 and am still wearing in 2019.

The original sash — made of a dull brown silk and attached to the blouse — was worn out years ago. I asked Fatima to make this crisp, chocolatey linen replacement.

I noticed when I put this top on the other day that the elastic in the smocking is gone. The stitching is still there, but the elastic is worn out — so at the end of the summer, I will ask Fatima to re-do the stitching, too. She’s done this for me before (on another dress) and it will restore the garment.


I have updated my white pants. My stand-by white poplin pants, after many years and many washings, have thinned to the point of transparency. They are resting in the closet this summer, but I don’t think they are likely to re-generate.

These pants are a heavy cotton duck; the same cut/style as the gold pants that I wore in a half dozen posts last fall. My mother does not care for this shape, but I love them and you will see these white ones in several more posts before the summer comes to a close.

You may be asking, “Why so much loyalty, Directrice, to a relatively inexpensive top from Anthropologie?”

A fair question. My reasons are these.

First, this particular shade of red is a perfect mix of red and orange resulting in the color of bittersweet, which I love.

Second, that perfect bittersweet is set off with dark brown embroidery. An unexpected and sophisticated choice.

Third, the shape of this top is so charming. I do worry that it may be too jejune as I enter my 50s. But maybe not!


Finishing things off today, a pair of tortoise sunglasses (Tokyo tortoise, which is more yellow/gold than red/orange) from a year-end Illesteva sale.

Come in close, to take a look at the sash.

And now, I’m going to show you something.

Here is my former self. This photo was taken in September 2014. I can’t believe how much I’ve changed.

I’ve scarcely changed at all. My hair looks exactly the same. I may look a little heavier in the 2019 photos, but I actually think it’s the new pants. They’re a heavier weight and cropped above the ankle, so I am not getting the L-E-N-G-T-H-E-N-I-N-G benefit of longer trousers.


Congratulations, Directrice, for successfully embalming yourself in 2014.

* When The Photographer first moved in with me and began spending time with, and caring for, Harper and Posy, he marveled at Posy’s seemingly insatiable demands — for treats, meals, petting, brushing. At some point he said, “She’s such a greedy little thing.” It was true of her, but I realized that it might apply to me, too.

6 thoughts on “The Directrice Now and Then”