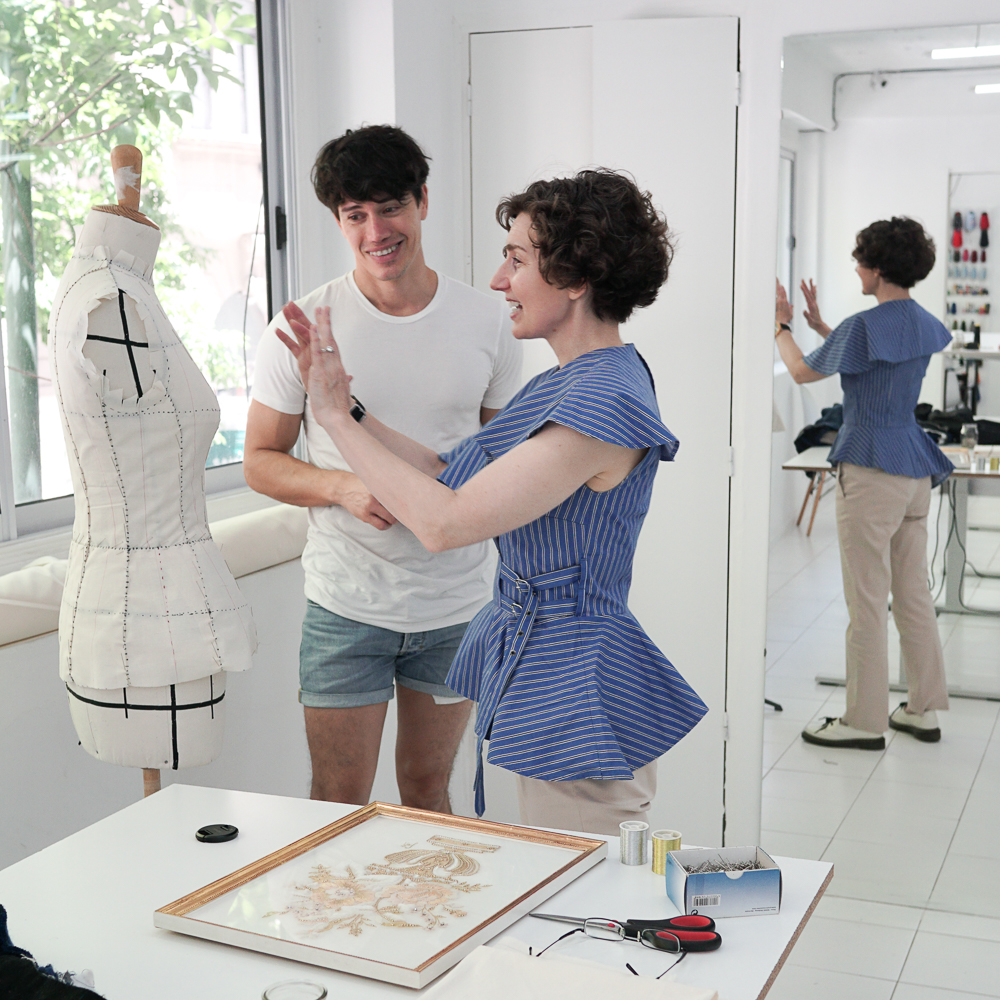 On our last day in Argentina, Luján — knowing my interest in clothes — arranged for me to meet a designer whose atelier was close to our hotel: Francisco Rojas of Design Maker Lab.

You can probably guess, I was practically beside myself.

Me inside an atelier!

This is the scene.

Francisco was born in Buenos Aires and learned sewing from his mother, but went to Germany to study at the Berlin campus of ESMOD — the École Supérieure des Arts et Techniques de la Mode — for four years. After that, he was an apprentice at Lesage in Paris — the studio that supplies hand-embroidery to the Paris’s couture houses: Dior, Chanel, Yves St. Laurent.

Following his formal schooling, he worked for Escada and then stepped into a product development role in the partnership between Y-3 (Yohji Yamamoto) and Adidas.


After many years abroad, he returned to Buenos Aires to open his own studio, which is part atelier and part school. Given that he had a rigorous education in all of the skills associated with design and as well as the business of manufacturing, he has decided to teach these skills to designers in Buenos Aires.


Francisco is making a special occasion dress for Luján.

Photos on the dressmaker’s dummy can’t do it justice, but trust me when I tell you that it is very elegant, combining elements of the kimono with very simple contemporary lines and ease of wear. For example, it looks like a wrap, but it is not. No flying open at the wrong time!

Francisco’s philosophy of design is compelling. He wants things to be beautiful and crafted with the highest level of skill and care, to tell stories and hold meaning — but he also wants the clothes to be practical: comfortable and wearable.
Here, I am clearly rhapsodizing about seaming, darting, and exterior scaffolding. Francisco told me the number of seams in his fitted blazer; it’s a lot.


Francisco’s signature is rooted in the heritage techniques of couture work — he prefers a simple fabric that is either cut in an interesting way or finished with fabulous hand-sewn details.

When asked to name the country producing the best fabric, he said Italy makes the finest natural fiber fabrics (wool and linen), but that Japan is competitive in this and produces the most beautiful, cutting-edge synthetics, as well.

When pressed to name the most stylish city in the world, he was reluctant to choose one but eventually suggested Osaka. He said the street scene there has everything — elegant restraint, avant-garde, punk/schoolgirl — and that looks he saw there years ago are only now catching on in other cosmopolitan cities.

Note to Self: Must visit Osaka! It IS the future.

We discussed the style of Argentinean women, which, according to Francisco, is becoming more daring and experimental — a trend he credits to Instagram. Note: They are becoming more daring and experimental, a relative qualifier. Traditional and conservative are still king. But avant-garde design is developing a following in Buenos Aires that did not exist ten or more years ago.

He did tell me that I would be mistaken for a European while walking around Buenos Aires. Oh no. Apparently I am neither a Master of Disguise nor an American Ambassador. I thought I was both.
Here is an example of Francisco’s design philosophy. This blazer was made for an event connected to breast cancer research and fundraising.

The vibrant color is associated with the cause; the feminine shape and the structure are all about strength. The decorative stitching on the lapels is intended to evoke the infrastructure of the body: veins and muscle. And the circle where a breast pocket would ordinarily be? It could be a breast, a void, or a target.


I wanted to look at everything and Francisco very generously indulged me. In addition to the large workroom, his studio has a machinery room equipped with several sewing machines, a steamer and other equipment, a kitchen, and a lounge area.

Thanks again to Francisco Rojas for his hospitality and Luján and the Hub Porteño for arranging such a wonderful visit.
Now on to business: my packing list. This trip was 19 days — 5 summery days in the city and 14 variable-temperature days in very remote, but elegant, places catering to outdoor enthusiasts. I was required to bring a waterproof shell, rain pants, hiking boots, and woolen hiking socks.


There was no color scheme. I’ve read that the easiest way to assemble a streamlined vacation wardrobe is to pick three or four harmonious colors — e.g., black, tan, blue or white, tan, green — and then pack only things in those colors. To the extent that my wardrobe had a scheme, it was stripes. Or possibly color.


Everything was worn at least once. Many things were worn several times and washed mid-trip. All of my things (included unlisted pajamas, underwear, and socks) fit into a 21″ suitcase and 1/2 of a 25″ suitcase that The Photographer and I shared.

The Photographer reports that he paid no attention whatsoever to color scheme, but underpacked T-shirts and terribly overpacked toiletries.

* The RealReal has had a number of these jackets in numerous sizes in recent months.

5 thoughts on “Visit to an Atelier, and Suitcase Post-Mortem”