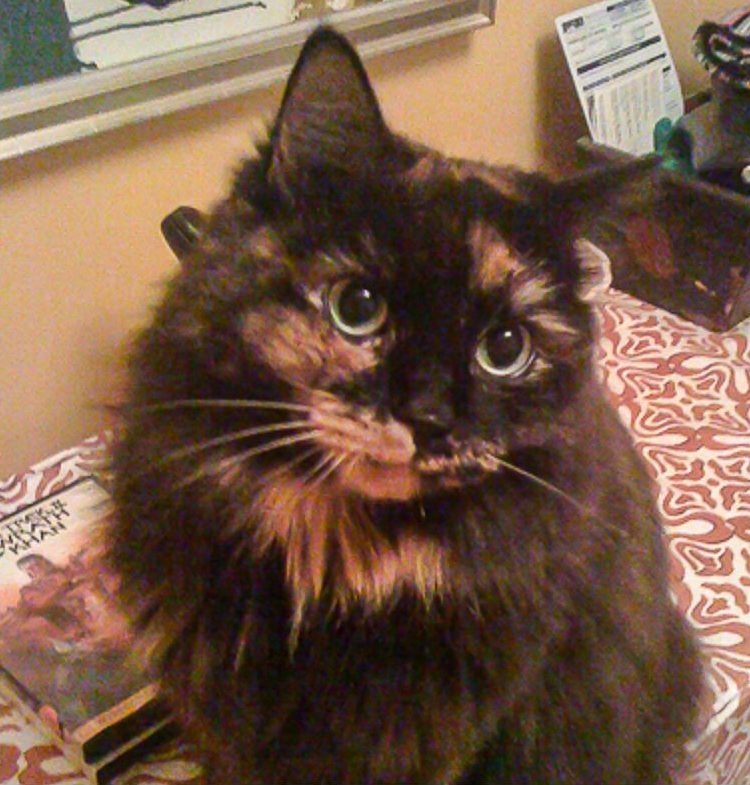 Sharp-eyed readers and Directrice scholars may have noticed that Posy was not included among the staff of Directrice Global Industries in our end-of-year roundup post. My valiant little kitty has joined Harper in Cat Heaven where, in all likelihood, Harper is probably ignoring her as she did on Earth. But I’d like to think they are curled up together, waiting for me to join them.

I loved my dear Posy. She was brave, brilliant, and beautiful — and a valued member of my household and our little inter-species family for fifteen years.
I got Posy when Harper was three. Because I worked long hours, I thought my companion animal would benefit from her own companion animal.


When I brought Posy home, I planned to keep her in the study for a few days, so that she and Harper could slowly grow accustomed to one another. Posy scaled the double-height baby gate I had installed within hours.


Harper and Posy adjusted quickly, but never became bosom bows. Perhaps it’s fair to say that they cohabited well enough as, say, cell-mates for 14 years, but never would have been pen-pals.

When Posy was only a year old, I was woken in the middle of the night by the sound of someone kicking in the door of a neighboring apartment. This is a terrible sound, for those of you who have never heard such a thing. While Harper scurried under the bed and I lay there trying to decide whether to (1) scurry under the bed or (2) go out to investigate or (3) call the police — Posy stood in the foyer of the apartment growling, ready to fight any intruder.*

My valiant little kitty! Much braver and more decisive than me.

I loved Posy, but I must tell you, she was not the easiest cat. Posy was very vocal, very demanding, and single-minded in pursuit of her demands. The Photographer and I often felt that Posy was desperately — frantically — trying to communicate something bigger to us.


I often speculated that she was a nuclear physicist trapped in the body of a cat, and that that transmigrated soul regretted having wished to return to Earth as a pampered house-cat (one of my hopes for the afterlife) upon realizing the social and intellectual limits placed upon a creature without human language and opposable thumbs.

When not trying to bend us to her will, Posy was a curious, social kitty.

We often joked that if police, fire, and emergency vehicles were to converge out front, Harper would close the shades but Posy would rush outside to “get the story” — and get in everyone’s way, possibly impeding rescue efforts.

She certainly never allowed any sense of Harper’s boundaries to prevent her from trying to “get the story.” When Harper was frightened, upset, or unsettled — often after a visit to the veterinarian — Posy would get right in her face, which always made the situation worse.

Posy’s curiosity drew her into many Directrice projects. She always wanted to participate in photo shoots.


As a result, we have ample evidence of one overriding truth: Posy did not like to be held.

Perhaps her physics training enabled her to turn into liquid when picked up?


I spent 15 years trying to accustom her to being held, with very little success.

I will observe that an eight-legged cat — like a liquid cat — is also very hard to control.
Here, a photo-essay documenting Posy’s resistance to being held.

Despite not wanting to be held, and making a lot of demands (particularly of The Photographer+), Posy was a faithful companion when I needed her most.

Over the span of Posy’s life, technology made it very easy to work at home rather than at the office — and so I was able to put in long evening and weekend hours from the comfort of my apartment. Wherever I set myself up, Posy knew that the laptop and a stack of paper meant “naptime” and she would lay down quietly next to me for hours and hours.


Little is more soothing, more restful, than watching a cat nap. Watching their little stomachs rise and fall as they breathe and snooze.

This is true even when the cat is snoozing on the table and you know in your heart that allowing her — practically encouraging her — to do so is unsanitary.
The deaths of Harper and Posy mark the end of an era and have required some introspection.


I got these dear girls when I was relatively young and single — and uncertain that I would ever marry or have a family of my own. I know that I was a loving caretaker and guardian to them, I know I loved them well and I know that I made certain that they had all the best care — but I have concluded that they didn’t need me. I needed them. And thus, while I gave them everything I had, I received more than I gave.


There will be other cats, and certainly more tractable and hold-able cats, but I will always remember my little Posy, and I thank her and honor her for helping me create a household of my own.

May you rest in peace, my valiant little kitty, and if you are reincarnated, may you return as a physicist.
Note: It’s been a busy week for posts, so be sure not to miss the last three posts: pinwheel of delight, the year’s best, and heavy metal.

* As it turns out, Posy did not have to defend the home. The “intruder” was a young, immature man who lived in the building, came home very drunk, and decided to kick in his door when he could not find his key. A problem solver! I did go out into the hall when I heard the voices of other neighbors. The coop board president was first on the scene and she was a no-nonsense lady.

+ Posy adored The Photographer and had him wrapped around her little paw. Because he works from home, she bothered him all day, demanding petting, brushing, treats, games. And because he has a very tender heart, he gave her everything.


** Harper was the accidental offspring of a friend’s cat and Posy came from a breeder. Both of them would have found wonderful homes if I had not appeared on the scene. By contrast, Mr. Orange and Philo, the newest members of the household, needed me. Mr. Orange was the beloved pet of a colleague who was forced by severe and intensifying allergies to give him up. Despite his sweet nature and good health and looks, he’d had three homes in five years and needed permanence. Philo was a young and slightly ragged cat with worms, fleas, and other parasites, surrendered by a “collector” and working his way through a rescue network. He needed regular health care, regular food, loving caregivers and the companionship of another animal.

16 thoughts on “My Valiant Little Kitty”