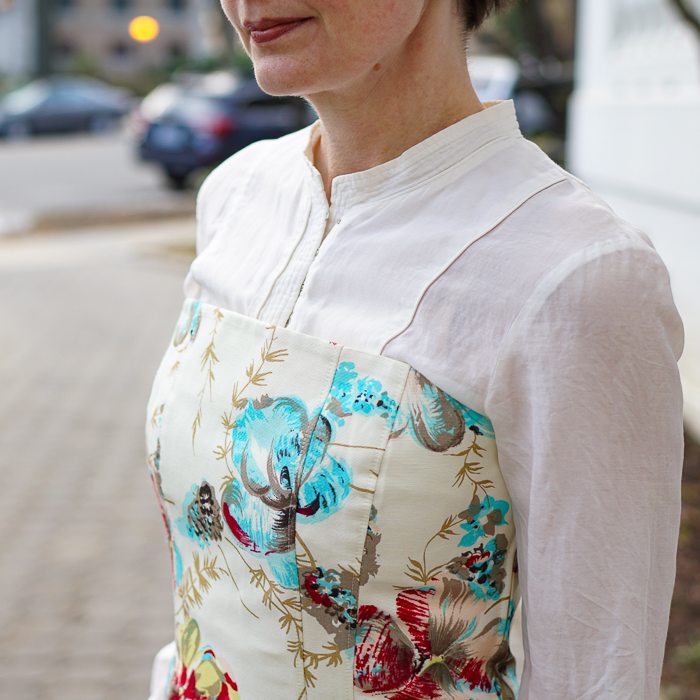 I am a little tired today, and thought about making this post the blogging equivalent of a silent movie — no words. This idea amuses me. Some day, there will be an epic contest . . . in which I will put up photos and ask you to supply the text and captions. It will be like a New Yorker cartoon contest for die-hard Directrice readers.


On to business. What’s all this then?

The Photographer and I ventured outside last weekend with the camera. We did not venture far.

So here I am, wearing a utility jacket and jeans and something else. A third piece.

Back to the third piece.

Here is a better view. It’s actually two pieces: a floral bustier over a voile blouse. But clearly the bustier is the piece I am talking about.

I think this floral is very beautiful. It really does fit like the bodice of a late 18th century dress. Is it too Poldark?


Is there such a thing as too Poldark?

I don’t think so, but I’ve only watched the first two episodes of the second season.

I have now run out of words, so I will close by saying, “Have a fantastic weekend!”


Whoops! I forgot to show you the back.

I am not bothered by the fact that the patterned fabric does not wrap the whole way around me. I would prefer that it did, but am not put out because it doesn’t.

8 thoughts on “The Limits of Artificial Intelligence”