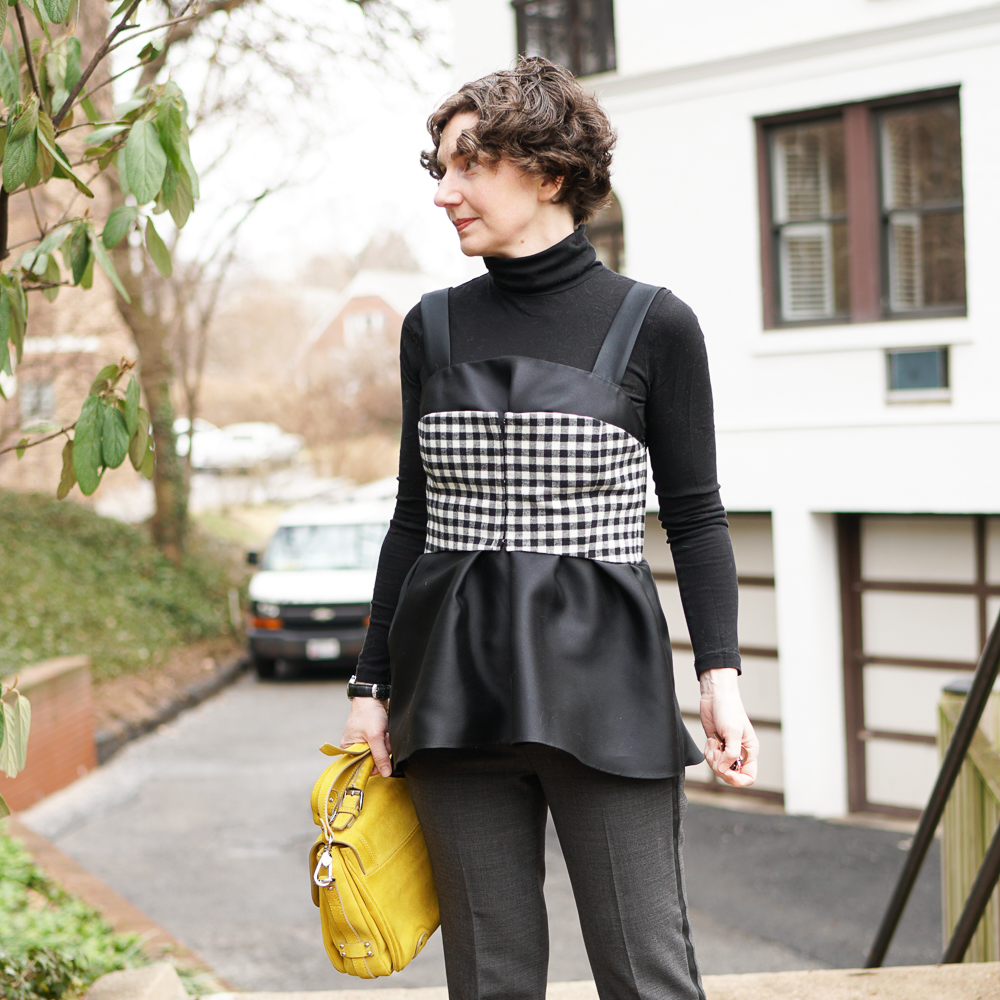 I’ve long been a fan of gingham fabric. Aren’t most girls, if they read the Little House books?

A periodic serving of gingham is so refreshing.

But the gingham in the top you are seeing today was incidental to a larger imperative.

While sifting through the Barney’s end-of-year sale after Christmas, I happened upon a garish, but irresistible dress made of sunflower gold lace, denim, and purple/indigo gingham. It pulled me in, but I declined to buy it because I could not envision a way to make it wearable.*

Instead, I looked for other things by the designer, CF Goldman.


How had I not known of CF Goldman until December 2018? Think of all the time lost.

The label is defined by layering, emphatic shapes, bustiers. Doesn’t it seem as though I could be CF Goldman’s muse?


Here, it seems important to tell you something.

This top was not actually a top when I saw it. It was a ballgown. Full length, with a dramatic skirt. But it was marked down 85%, which made it the price of a top.

Making the front a little shorter than the back was my idea, but bringing the back to an asymmetrical point was Fatima’s inspiration. I brought the dress to her and she snip, snip, snipped the skirt off while I was changing. She is fearless.


Perhaps you are saying aloud, “Directrice, tell me what I’m seeing.”

I am wearing a tissue-weight cotton turtleneck under the top.

The black ballgown tank is made of a luxurious silk-wool blend. It has the most beautiful, sculptural hand and a light sheen. The tank is very full and is cinched by a flannel, gingham corset.

The pants you know and love: my stowaway stripe cropped wool trousers that you’ve seen here and here and here.

CF Goldman shows these corsets done up and partially undone — a look that I told The Photographer made me think Blowsy Milkmaid.

* This is the gold/denim/purple dress. I couldn’t wear something under the dress because of the lace. I thought about buying two of the same dress and having Fatima meld them into one dress . . . and then closed my laptop.

A final tip! You may want to check out these JCrew dresses.

12 thoughts on “A Return to Gingham Style”