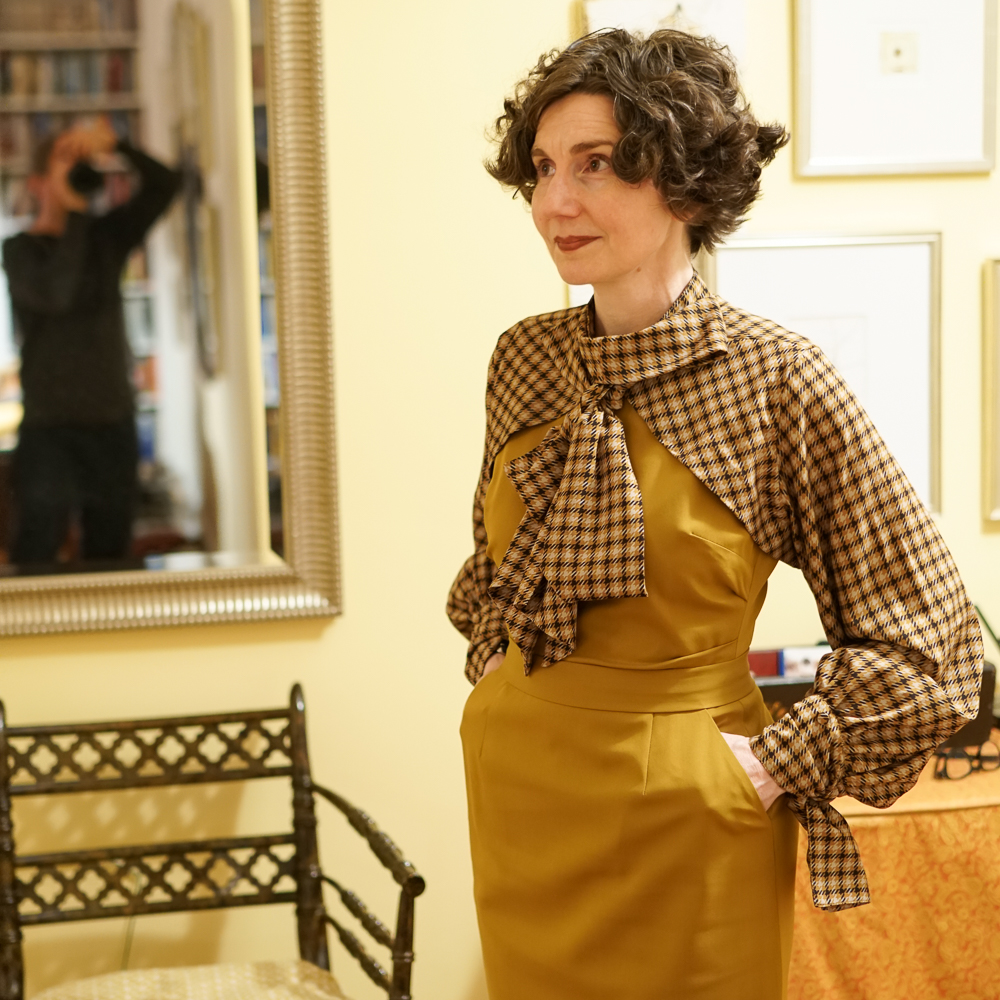 Several weeks ago, I mentioned that I’d been scouring The RealReal and YOOX for a past season houndstooth bolero jacket by Stella McCartney.


This is what was holding me in its thrall.


I realized after several months of waiting that it might be a while before this jacket would appear and it might not appear at a reasonable price and even if it did, there was a good chance that the overly stiff fabric would look ridiculous on me.
So I decided to take matters into my own hands and make a jacket like this myself.

Understand that when I say “make myself,” I mean “bring something to Fatima and describe what I want and see what she can do.”


This is what I brought to Fatima along with photos of the Stella McCartney jacket and a selfie showing the blouse pinned, wrapped, and held by me.

I seem to have deleted the selfie from my phone.

All I had to do was wear it backwards, reshape the opening of the former back/now front, tighten the fit, and shorten the former front/now back by approximately 24 inches.

As I am sure you can imagine, Fatima was really into it.


Here’s where things get really interesting.*

I planned to wear this bolero jacket with a lace blouse (as Stella McCartney had shown it) and tweed pants (which I don’t own) or jeans (which I do).

But I had to go to a fancy cocktail party last weekend and was planning to wear this old outfit when I realized that the bolero might work very well instead.

The jacket will also look beautiful with this, this (but what shoes?), and this.
Allow me to walk you around my creation.

Fatima and I had a mild disagreement about the back. She felt that it should fit snugly, but I wanted the back to hang like a rain shield on a trench coat.

Are you noticing the cats in the background? In this photo, they are in column formation. A sloppy column, but a column nevertheless. Posy is, regrettably, laying on the kitchen table.

You might be asking, “Directrice, why do you bother?”

I’ve asked myself the same question and have realized the answer is this. I don’t have the artist’s hands or the craftsman’s skill to create beautiful things from raw materials, but I do have imagination and artistic impulses. This is my creative self.

I recently was introduced to a reader (one of you!) by Fatima** and we agreed that having a wonderful seamstress in your life changes your relationship to clothes. The specifications of a manufactured garment are only a suggestion. An opening bid. An invitation. The only real limitation is $$$$.

Kate recently wrote that she had a stack of things to bring to Fatima and her wallet was trembling. I love the image.


I like my houndstooth bolero better than the Stella McCartney one!

** Kate needed a good tailor and read about Fatima in one of my posts. Fatima mentioned to me that one of my readers had dropped off some clothing for alteration and so I left one of my cards with Fatima to give her! If you need a good seamstress in your life, you can reach Fatima at Bespoke Tailoring, 1100 New York Avenue NW, Washington DC. Always call first, because her schedule varies; her number is 571/313-9760.