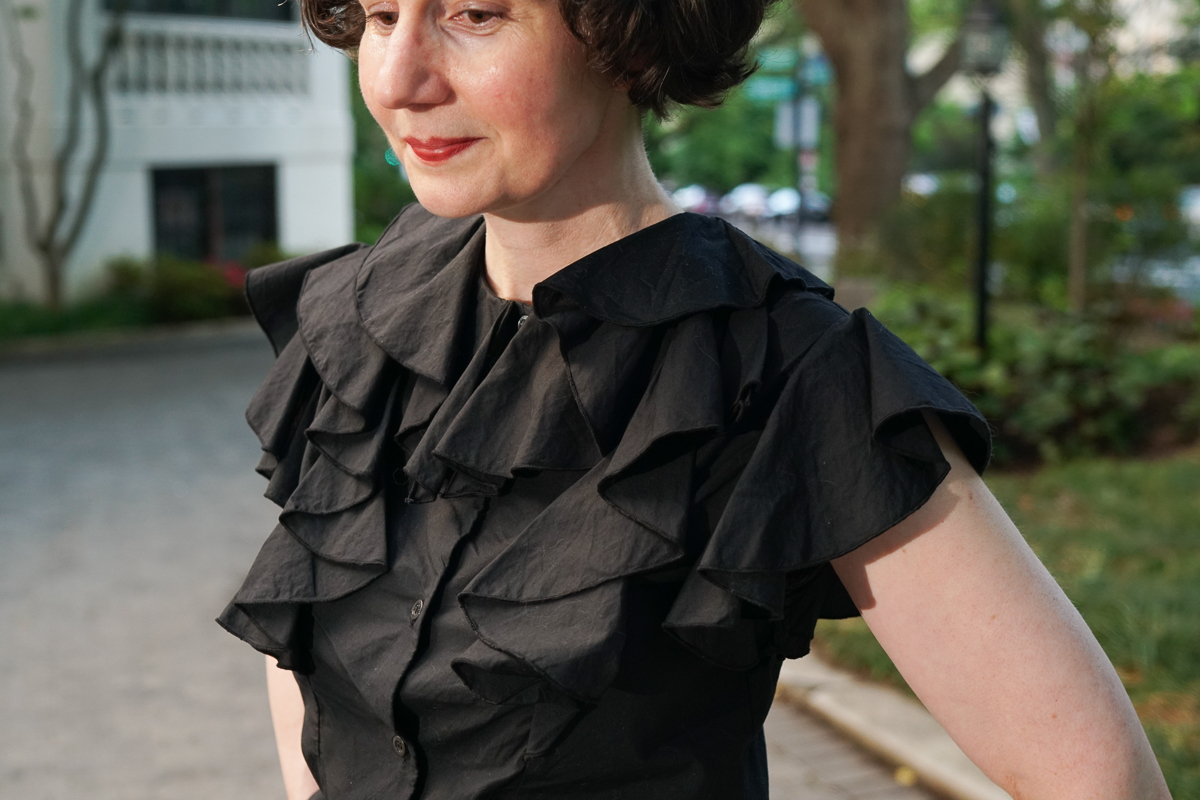 Do you remember that I told you, long ago, that a Substantial Top could stand in for a Smart Jacket under certain circumstances?

It’s true. True that I said it, and true as a statement of fact.

Here, I will show you casual tops of substance standing in for casual smart jackets. Bonus re-fresher: white and black tops are always a good buy.

Do you remember this delicious wedding cake of a top?

It began life as a dress, but I bought it (on sale) knowing that it was meant to be a top.

Last month I realized — emboldened by the voluminous creations of Simone Rocha, Cecilie Bahnsen and Molly Goddard — that it was intended to be a shorter, flirtier top than I’d originally envisioned and asked Fatima to take 3 inches off the bottom.

There’s another lesson there: Never be afraid to keep tinkering.
Here is the second top, in black cotton lawn.

This top started life as a top, but it was a shapeless top with a long, sad shirt-tail hem.

Trust me when I tell you that it was not nearly as shapely on me as it appears on the mannequin. It was very straight up-and-down with no darts or seams for shape.


But it had such possibilities with those wonderful ruffles encircling the neck.

All it needed was four vertical darts (two in front and two in back terminating at the waist to taper the fit and create a bell-shaped peplum), a straight hem, and a skinny belt. This was child’s play for Fatima.

Won’t this be elegant later this summer with a long linen skirt in white or tan?


Come closer so that you can see the ruffles. But not so close that you see the cat hair and lint.
Here are some final notes.

First Note: I finally got my hair cut.

It’s a little longer than I used to wear it (c. 2015-2018), but much shorter than I have been wearing it (of necessity) during the pandemic.
Second Note: Somehow . . . I really don’t know how, exactly, but it happened during the pandemic . . . I have become obsessed with Pools of Light necklaces. The term refers to a particular type of quartz jewelry that was popular during the Victorian era.

A classic Pools of Light necklace is a 20″-30″ strand of large quartz beads (16mm-20mm) bound and connected by a sterling silver cord.

The quartz has to be relatively free of imperfections and is not drilled so that each sphere appears — when the light hits it just right — illuminated. This particular example is unusual because the beads are set in wide silver bands rather than crossed or looped cord. This necklace is also unusual because it is more like a station necklace than a strand of beads — which I prefer because quartz beads are heavy.

Final Note: This is my 600th post! So many words. So much wisdom. And a few unfortunate choices. Take a look back at the links embedded in this post; they are funny posts.