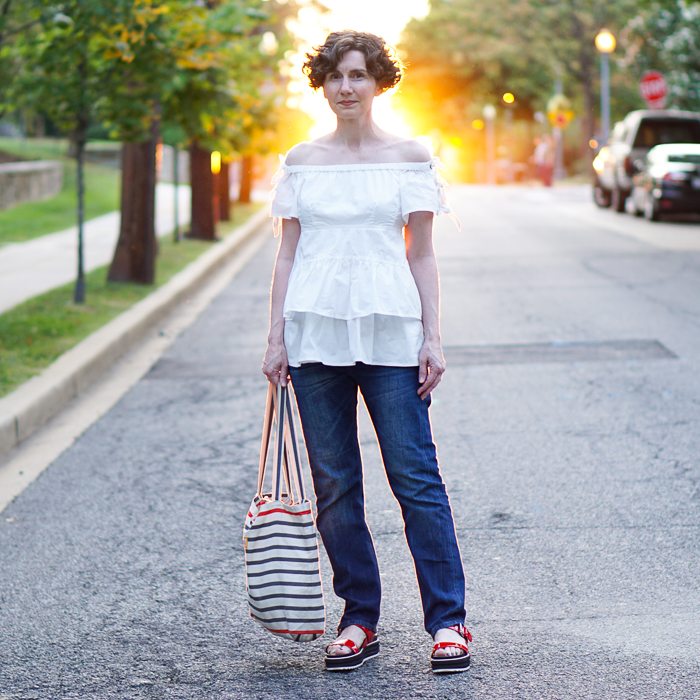 In honor of Labor Day, I am wearing something that can’t be worn to work.


The Photographer and I are back on location. Let’s see how many photos you need to pinpoint our backdrop.

We’ve got some Gothic elements. Clearly, reproduction Gothic in the United States . . . so that doesn’t help with year of construction but it should help you think about the kinds of institutions that use Gothic architecture.

Unfortunately, The Photographer did not pack his 24mm lens, and so we couldn’t get a photo in which you can see the whole building and discern me. As you can see, I am quite tiny just standing in front of the entrance to the building.
Although this is not a full body shot, it captures the essence of The National Cathedral. Since we couldn’t do much with the full facade of the building, we wandered around the grounds looking for architectural details that would provide a nice background. There are many.

This photo, however, was taken in front of the outdoor elevator bank that leads down the Cathedral’s underground parking garage. I don’t think it’s a point of interest on the tour, but it’s a good backdrop.

The National Cathedral — which is not “national” in the sense of “sponsored by the government” — was significantly damaged in 2011, when D.C. experienced an earthquake registering 5.8 on the Richter scale.


I was at my office when the earthquake occurred. My first thought was that a really big person had fallen in the office directly above mine. My second thought was that there had been an explosion at the (then) construction site next door. My third thought, which occurred while the building was still shaking was, “Earthquake? Surely not here.” But it was.


Perhaps you are wondering why I can’t wear this outfit to work, at least on Casual Friday.


This top began life as a dress. If you can imagine, the skirt included two more tiers.

Taken altogether, it was much too much for me. So I cut off the skirt and now it only looks somewhat like a layered cake.


I like this top equally with the sleeves up and with them off the shoulder. The grommets and ties are the key.

The Photographer likes to experiment with lighting. As we were leaving the Cathedral grounds, the sun was very low in the sky and appeared like a ball of fire behind us, which he wanted to capture. So I look like I am walking away from a minor nuclear explosion . . . which I guess I sort of am.


One other thing: After offering a Directrice mug to the winner of our big summer contest (Where’s Directrice?), I received several inquiries from readers (OK, family members and colleagues) about these putative mugs (ThERe ArE MUgS??). It never occurred to me that anyone might desire a Directrice mug, but I am now getting ready to order another dozen or so. I will periodically put one up as a prize, but if you don’t want to take your chances on fortune and would like to buy one now, send me an email (or post a comment) and I’ll order one for you. Cost is $12 and we can sort out payment down the road.