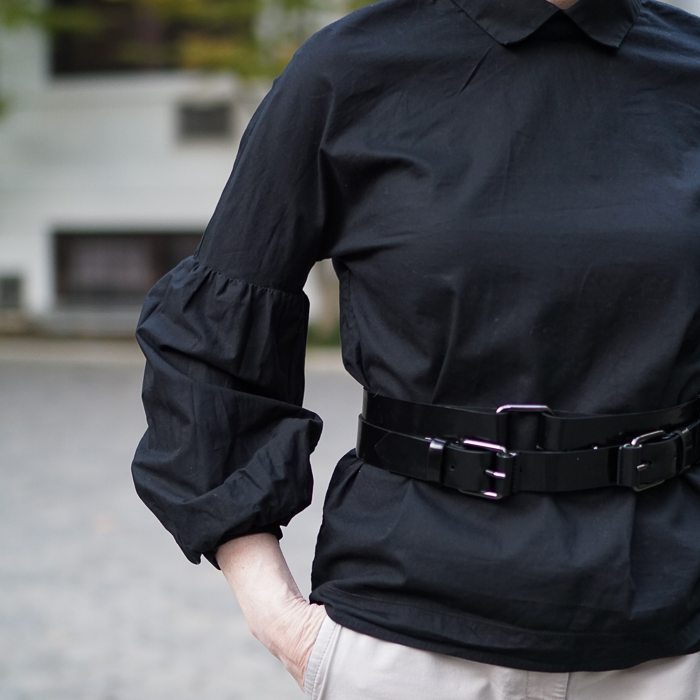 Have you ever found yourself so far behind the times that you wound up on the cutting edge? They say time is an eternally recurring loop.

I bought this lantern sleeved blouse last winter from YOOX, which means that it was probably sold at retail before 2015, and yet it seems to be au courant. This season (SS2017) everyone is showing blouses with enormous, blooming sleeves.

I suppose it is possible that this purchase was not behind the times, but rather on the cutting edge.

The shape strikes me as neo-Edwardian, but I haven’t seen the term applied by any fashion editor.

The Edwardian period — derived from a reign of only 9 years — had an early period and a late period. Leg o’mutton sleeves (what a horrible name) were popular in the late period, but the shape was inverted (full over the forearm and then cuffed at the wrist) during the early years.


You may remember that this blouse is very boxy. But it recently occurred to me that the blouse might look better if it had a little shape.

I was planning on bringing it to Fatima so that she could add some darts or other clever contouring with seams and then I had another idea: I could simply belt it.


And I have just the belt for the job: the kick-a$$ belt.


If you’ve seen the movie Soapdish, you may remember a network executive (played by Garry Marshall) chastizing one of his producers for running a storyline that was depressing and expensive. He said, You know the words I like? I like the word “peppy” and the word “cheap.” Peppy and cheap.

See the belt lend its expertise and panache to these outfits: Back, in Black, Working in Pajamas, and A Work of Art.
And on another note: The Photographer and I went to the Women’s March on Washington and were astonished and thrilled by the energy in the air. The protestors and lawyers working at the country’s international airports this weekend have blown me away. This is America.