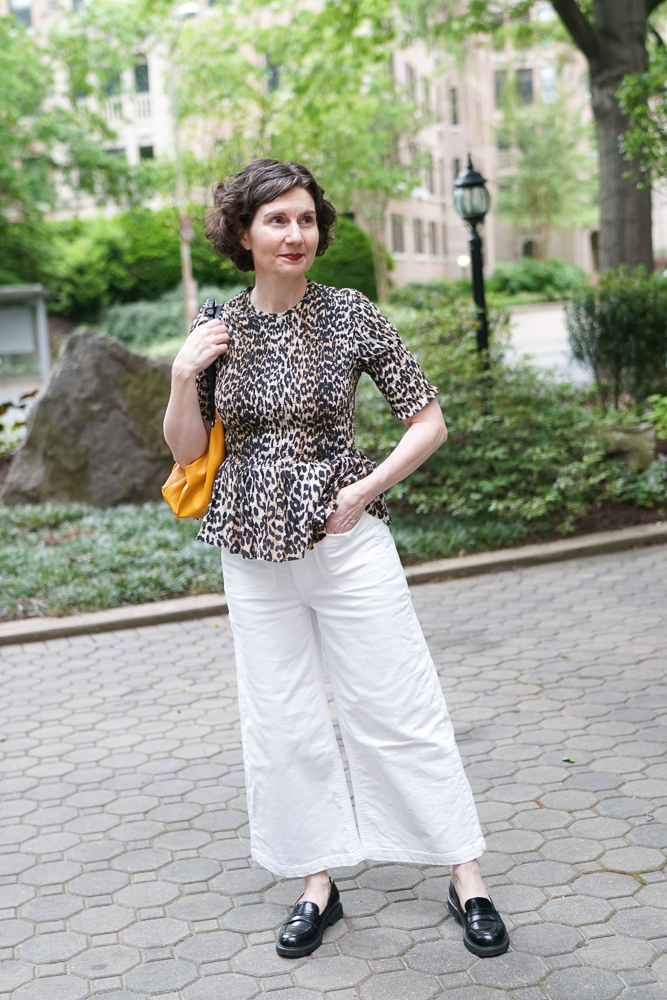 The last trip I took before coronavirus upended . . . well, everything . . . was to New Orleans. I’d never been before, but had a board meeting scheduled for early February there and arranged to meet a friend a couple of days early to see the sights.


Because I was sans photographer, I don’t have good photos to share.*

So I will just tell you about my trip and show you what I wore.

As you may remember, my imagination fails when tasked with packing for weather unlike D.C.’s. New Orleans in early February was in the low 70s.


I wore this leopard top with wide-legged heavy cotton pants (with a denim jacket and a trench coat over the denim jacket) and packed:

I decided that a pair of assertive black loafers would do for all New Orleans activities.

I fancy myself a master of disguise, and like to blend in when I travel . . . but these delusions have to be balanced with my desire to be a good ambassador (another delusion) for the city/region/country I am representing.

I think leopard fit the bill in New Orleans, a city of great beauty, mystery, warmth, and complexity.

My friend and I took a guided tour around the city to get a fuller survey than we might have achieved on our own and on foot. Our driver and guide was Rene, a New Orleans native with the most wonderful accent. Listening to him was entertaining and soothing — so much so that I feel Rene should record his own line of books on tape — and he needn’t read the books word-for-word. I think they would be better “interpreted” by him because he used lots of wonderful syntax and expressions.

Rene had lots to impart, but if we had created a word-cloud from his audio-commentary, I think the biggest words would have been “Katrina” and “Interstate” (pronounced “inna-state”).


Understandably, Hurricane Katrina remains a dominant presence in the city. For anyone who lived through it (and its aftermath), I expect that it will remain the most formative event of their lives — however long they live and whatever else they witness. The influence of “the Interstate” is more prosaic. And hopefully temporary. Rene was challenged by street closures and pre-Mardi Gras parades and gatherings, and felt that if he could just get to the Interstate, our tour would really get rolling. Hence, a little obsessing over the Interstate — always in sight, but just out of reach — during the first 30 minutes of our drive.

We saw the French Quarter, the Garden District, St. Roch, the 8th Ward. We visited a cemetery and a distillery and saw newly rebuilt areas subsidized to bring musicians back to the city after Hurricane Katrina.

Rene described the music scene, festivals, second lines,** and general hospitality of the city. He said, very kindly, “If you come to New Orleans and don’t have a good time . . . . that’s kind of on you.”

And now, for those of you who’ve been missing Mr. Orange and Philo, here they are.

* Is that nice? For all we know, I might have a medical condition (other than impatience) that makes my photos so terrible.

+ Leopard is almost always right. Maybe it’s not for a funeral — though I would say that depends on the decedent — but otherwise, it really works.

** For those of you who don’t know, the “second line” is an informal procession — sort of like a moving dance party — that follows an official parade. Rene pointed one out to us, and it wasn’t even clear that there had been an official parade leading the way. Here, I felt the full weight of my New England heritage. I pointed out to my friend, disbelievingly, “They aren’t even carrying instruments. Or signs.” She, from California, just shook her head at me. Apparently, the second line is not a performance or a protest; it’s just for fun. And that, Dear Readers, is part of the delight of New Orleans.